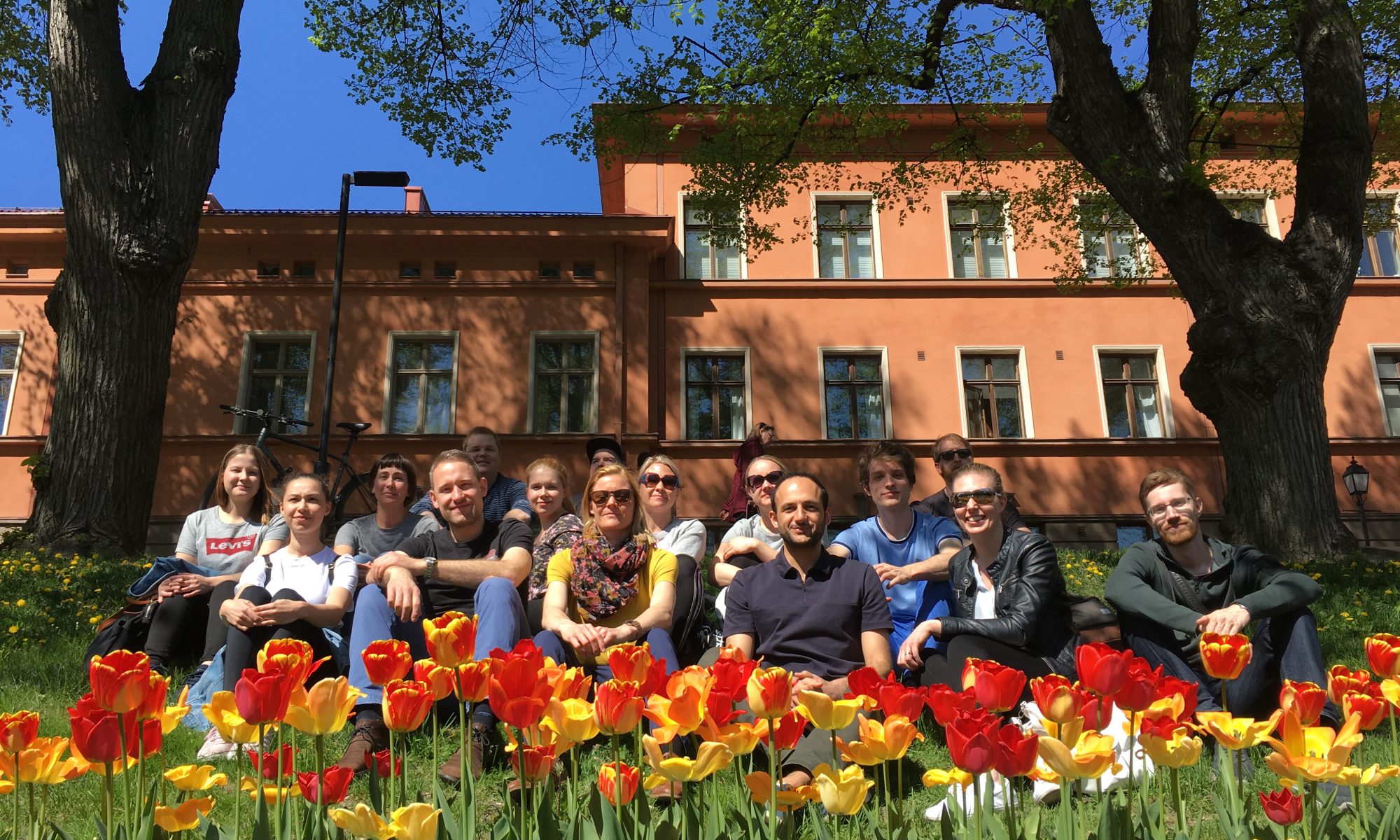 Brief background (Link to CV): Johanna Ivaska is a Professor of Molecular Cell Biology at the University of Turku in Finland. After obtaining her PhD at the University of Turku and following a post-doc in the laboratory of Peter Parker in CR-UK London Research Institute, she started her own group at the VTT Technical Research Centre of Finland. In 2013, she joined the University of Turku Bioscience Centre where she currently leads the “Cell Adhesion and Cancer” group. In 2015, she was awarded the highly prestigious national research professorship from the Academy of Finland. Her primary research relates to the biological role of integrins in cancer progression and, in particular, integrin-mediated cell adhesion and migration, cell-matrix interactions and mechanosensing, and the molecular mechanisms governing endosomal traffic of integrins and growth factor receptors in cancer. She is recognized as a leader in her field with numerous commissions of trusts including editorial duties in leading scientific journals, organization of international conferences and as a member of scientific advisory boards. She is regularly invited to speak globally at internationally recognised conferences (Gordon Conferences, EMBO meetings, ASCB) and institutes (MIT, Mount Sinai New York, Cancer Research UK, Institute Curie, Institute Pasteur, UCL, King’s College, University of Cambridge, IFOM Milan, IBEC Barcelona, MPI Cologne and University of Geneva). In addition to reviewing for the European Research Council, Johanna has also been a recipient of major research grants including an ERC StG, an ERC CoG and 3 x ERC PoC grants. She has also been a member of the LS3 CoG panel. Johanna’s contributions to research have been recognised through elected memberships to EMBO and to the Finnish Academy of Science and Letters. In 2011, she was awarded the Anders Jahre Prize and, in 2017, the Orion pharma research prize and the A.I. Virtanen medal for internationally recognized excellence in biomedical research.

My postdoc focuses on understanding the effect of endosomal sorting events on receptor tyrosine kinase signaling in cancer. I use biochemical assays and imaging approaches to study intracellular transport of membrane receptors by sortilin-related receptor – a well reported protein for its role in Alzheimer’s and metabolic diseases. I spend a significant amount of time exploring new cancer-related databases, among which cBioPortal is my favorite. Working in synergy with my colleagues is a value that makes research more meaningful!

I am a postdoctoral researcher in the Ivaska lab, interested in the role of mechanical forces in cancer progression. I obtained my Bachelors in Biochemistry at the University of Manchester, UK, where I then obtained my PhD in the laboratory of Prof Martin Humphries at the Wellcome Trust Centre for Cell-Matrix Research, using proximity biotinylation to investigate mechanisms of mechanotransduction in pancreatic cancer. My work now focuses on how cells respond to mechanical stimuli via integrin adhesion complexes and the cytoskeleton during laryngeal cancer progression.

I am a postdoctoral research fellow working on image-based screening approaches and cancer invasion. During my undergraduate studies at the University of Adelaide in Australia, I majored in Chemistry and Biochemistry, conducting an honours degree in the lab of  Prof. Greg Goodall working on the development of miRNAs as therapeutics in neuroblastoma. Moving to the lab of Prof. Paul Timpson in Sydney, my PhD focused on the development of a intravital imaging approach to track therapeutic responses in areas of low oxygen in live mouse xenografts. My work is now centred around the development of new fluorescent FRET reporters for RNAi screening of the phosphatases that regulate integrin activity.

Coming from France, I’m a joint Postdoctoral researcher working in J. Ivaska and G. Jacquement laboratories. I obtained my Bachelors, in Cell Biology and Physiology, and, Masters, in Developmental Biology and Stem Cells, from the University of Strabourg. I then joined the lab of J. Goetz to study the impact of hemodynamic forces on the metastatic cascade. Now, I am working on the role of cell protrusions during PDAC intravascular arrest, adhesion and extravasation.
A good working day starts with cell culture, keeps on going with imaging of zebrafish embryos and finishes with a beer.

Originally from the UK, I did my PhD in the laboratory of Prof Martin Humphries in the Wellcome Trust Cetre for Cell-Matrix Research, University of Manchester. I then did a postdoc with Prof Rachel Lennon, before moving to Finland for my current position. I try my best to take care of the group, to manage visibility of the lab, help in scientific writing and to be the communication bridge between academics and admin. It is a busy job but I love it!

Originally from the north of Finland, I acquired my Bachelor’s and Master’s degrees in Cell and Molecular Biology from the University of Jyväskylä, while working in the laboratories of J. Bamford and T. Kuopio. My undergrad studies and time spent abroad as an exchange student both shaped my interest in human malignancies and cell-matrix interactions; consequently, I sought to join the Ivaska lab as a PhD student. My current projects revolve around cancer cell mechanotransduction, inclucing mechanosensitive transcription factors and mechanically directed cell migration. Outside work, I like to relax by exercising and catching up with friends.

I did my Master’s thesis work in the Ivaska Lab investigating the role of the sorting receptor SORLA in the endosomal trafficking of the growth factor receptor HER2. I’ve been a PhD student in the lab since September 2019, studying the interplay between cancer cell adhesion, cytoskeletal dynamics and membrane trafficking and exploring the regulatory network that coordinates these processes, with the goal of identifying new mechanisms to prevent metastasis. What I enjoy most about working here is the great people, the dynamic atmosphere and the possibility to do some world-class microscopy. During my free time I like to do sports such as bouldering or swimming and I also sing in a choir and play the guitar.

I am a phD student at the Ivaska lab and I’m working on integrin regulators and mechanosensing in cancer. I previously studied biochemistry at University of Turku (BSc and MSc). During my studies I worked as a research assistant on hormonal regulation of breast cancer (Lab run by Prof. Pirkko Härkönen).

To finish my master’s degree at the University of Applied Sciences Bremen in Germany, I am currently working on my master’s thesis in Johanna Ivaska’s laboratory. Coming from a microbiological background through my bachelor’s degree, I first entered the field of biology through my work on plant genetics, but during my semesters abroad I focused my interests towards cell biology and cancer research. Currently I am working on the phosphorylation of integrins. In addition to research work I like to explore the unspoiled nature of Finland.

I previosuly worked at VTT Technical Research Centre of Finland as part of the biochip-team, where I helped to test, develop and prepare Cell Spot Microarrays (CSMA). I then joined the Ivaska lab several years ago where I help in the day-to-day running of the lab. I have experience in many other molecular biology techniques including immunoprecipitation, PLA, tissue staining, immunofluorescence and FACS analysis.

I am a PhD student with a crush on mechanosensing. I grew up in the Finnish archipelago and obtained my Master’s in Biosciences from Åbo Akademi University (master’s project done in the laboratory of Professor Cecilia Sahlgren). My research focus is integrin activity regulation and trafficking, and how these processes are affected by the properties of the ECM. To better understand these questions I have set up both the RUSH-system and traction force microscopy in our lab. I do most of my experiments on micropatterns or hydrogels as plastic seems a bit passé. A perfect day is made up from a long run, strong coffee, great colleagues and some intriguing microscopy.

I completed my PhD in June 2020 in the Ivaska lab. During my PhD, I worked on the role of integrin inactivators in cancer cell motility and the tumour microenvironment. Currently, I’m studying lethal vulnerabilities in KRAS-mutant cancers. A good working day starts with a cup of coffee and continues with a fun day at lab with great collegues. I am now lookling for an exciting new challange abroad!

I’m working on my bachelor of Applied Sciences in the Netherlands. I’m doing my internship at the Ivaska Lab where I’m investigating intracellular trafficking of RTK’s in breast cancer. My hobbies include playing the cello and piano plus a lot of sports, I love to swim and run.

Filopodia are important cellular protrusions implicated in development and disease. My PhD project aims to dissect the mechanisms regulating filopodia adhesions with a focus on integrins and MYO10.

I’m an Academy of Finland postdoctoral researcher originally from Mexico. I did my PhD at the University of Manchester, UK with Prof C. Streuli, and a postdoc in Hamburg, Germany, working with Dr S. Veltel before joining the Ivaska lab. I’m interested in integrin traffic controlled by Rab21, the actin cytoskeleton and their interplay during cancer progression. The key to a great day is listening to cheerful music, tea and biscuits, lots of microscopy, plenty of scientific debates, efficiency and good results!​

Originally from France, I did my Master of Engineering at the ESPCI Paris. I am currently doing an internship where I aim at building a MCF10A-based 3D model to study the effect of Rab21 and Swiprosin1 on breast acini formation and the integrin trafficking within them. As from September 2020, I will start a joint PhD between the Ivaska Lab and the Jaulin Lab at the Institut Gustave Roussy (Villejuif, France) where I will study the role of oncogenic and mechanotransduction alterations in the focal-adhesion pathway on the colorectal metastasis polarity. A perfect day starts with a cup of coffee, continues with great colleagues and lots of microscopy, an insane amount of music (listening and playing), a good run, and ends with a nice beer with friends!

I have been an Ivaska lab member for several years and I help in the day-to-day running of the lab. I have experience in many techniques including but not limited to recombinant protein production, RNA and DNA isolation, imunofluorescence and western blotting.

I’m a PhD student working mainly on cancer and stem cells, MASTL, cell adhesion and actin cytoskeleton. I obtained my Bachelors and Masters in Biochemistry at the University of Turku. A good day at work consists of cell imaging, coffee and great work mates.